We are born naked - artists either reveal or obfuscate this fact in their figurative work.

Art history is rife with the clash of morality dictating the amount of clothing a model may wear. The Sistine Chapel was repainted long after Michelangelo’s passing to conform to more conservative tastes even though scripture teaches that the last judgement strips the reunion of body and soul of all worldly accoutrements.

And so what is so scandalous about the flesh? The wars wage on today with academic twaddle challenging personal agency and social media fundamentalists still aghast at the sight of one bare nipple.

Into the fray step two of Southern California’s most interesting painters to update the nude with fresh, contemporary approaches:

Lena Moross conveys a classy juxtaposition of the naked and the dressed, blending same-sex couples in poses that uncover more about the judgmental state of the watcher than of the subject

Insinuate without depending on nostalgia,  the cool brushwork here delineates our comfort level with the unclothed. No viewer who thinks or feels can evade the depth of the question these works imply.

Anna Stump has a facile brush for rendering and she pairs it with a conceptual push-pull installation for this exhibition. Behind a series of fluid yet accessible renderings, she has installed painterly washes for an all-over affect. The result is a critique of society’s debasement of our natural state, a lamentation of the 24/7 obsession with flesh that has eschewed intimacy for grandiose consumerism.

The curatorial pairing of these two is a hot and cool contrast that I hope can make us see fundamental figurative painting still possessing a charged radicallity. Artists can take advantage of concept to advance the ancient medium of painted surfaces.

And of course… the opening will have other surprises!
- MATT GLEASON 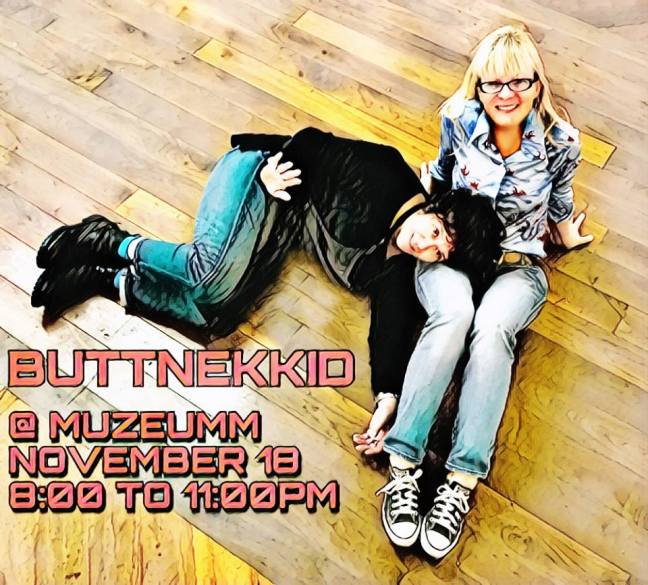 Buttnekkid is two artists’ take on nude painting. It is also a phenomenal show, as graceful as it is non-judgmental, lush and visceral.

As the show’s description notes “We are all born naked – and artists either reveal or obfuscate this fact when creating figurative work.” This show is all about the reveal. 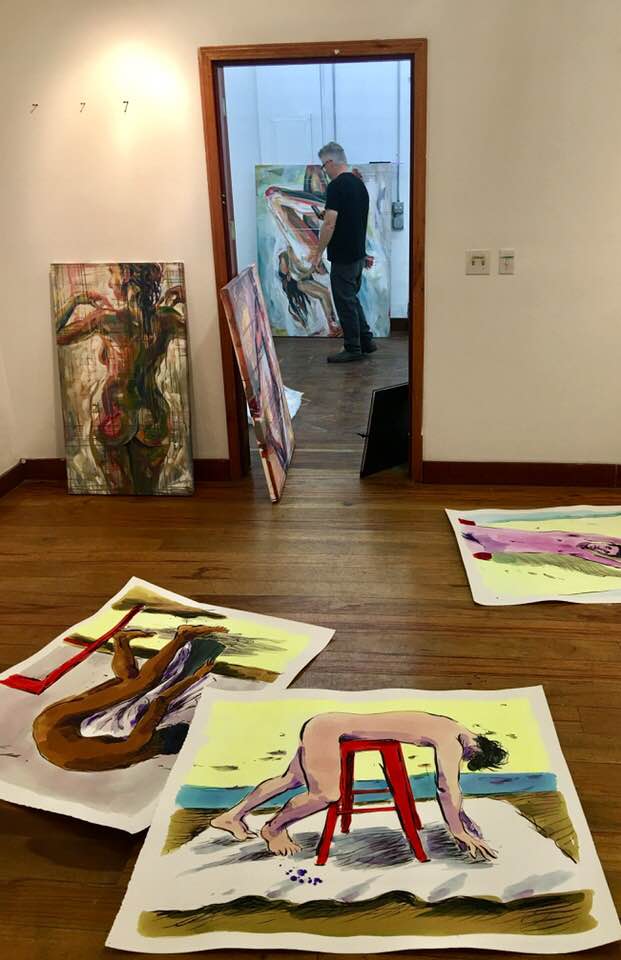 Above, show curation in progress

A reveal which oddly enough still makes some people uncomfortable. When Facebook frowns at posting something that even resembles a nipple,  it’s only too obvious that the puritanical purveyors of “morality” are still very much with us.

So it is worth noting that as well as being beautiful work, the two solo shows that comprise Buttnekkid, curated by Mat Gleason, are also making a bold statement as to the beauty of the body and our views toward it. 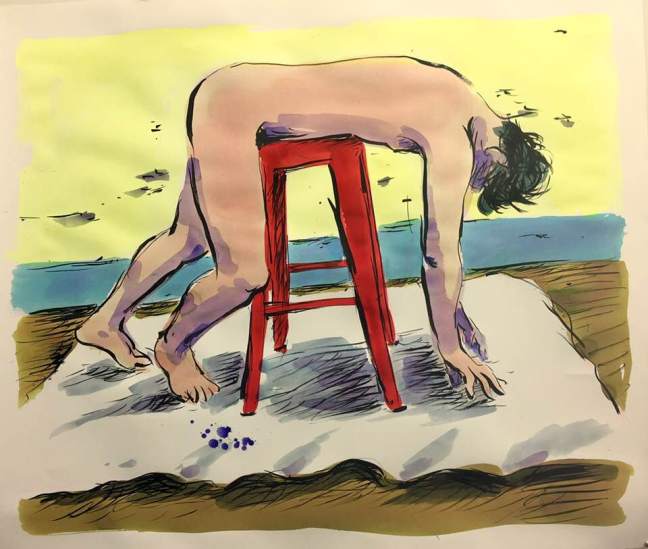 Lena Moross pairs same-sex couples in intimate yet unsentimental poses, some clothed, some bare. Anna Stump critiques the ways in which our society seems to fear flesh as much as it is obsessed by it. 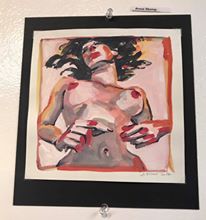 Both artists have a uniquely lovely way of expressing intimacy,  of revealing the body even as they portray this form as exactly what it is – completely natural. 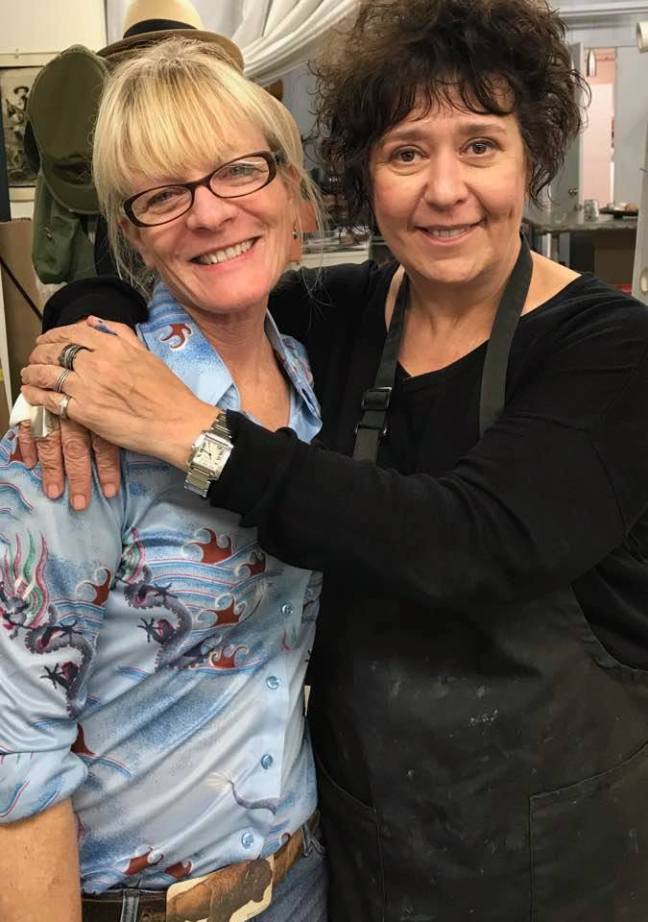 Moross says “I was working on my new series on figures and Anna saw it. She said she had figure paintings too, and proposed we do a double show at MuzeuMM.”

Because the two artists create entirely different works, they knew that their figure paintings would not mesh, and should stand as two separate, thematically twinned exhibitions at the gallery. 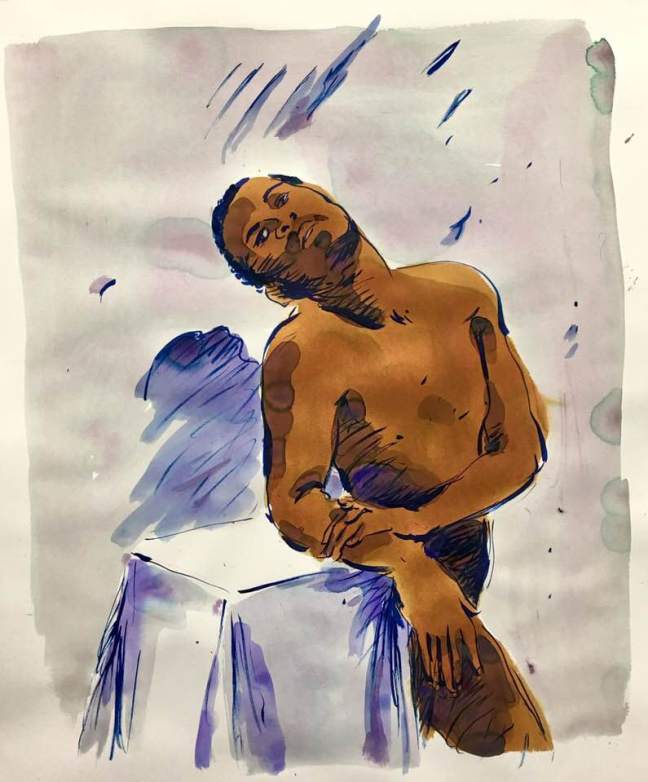 “I worked my usual way: staging and taking photos from real people and then painting from them. Anna did her take on the 1970s era pornography industry.  Basically we did our own thing in our studios,” Moross explains.

Stump reveals “About a year ago, Lena saw an older figurative painting I’d done with a heavy grid structure of drips. She really liked it and asked if I’d do an exhibition with her of nudes. I said, of course!” 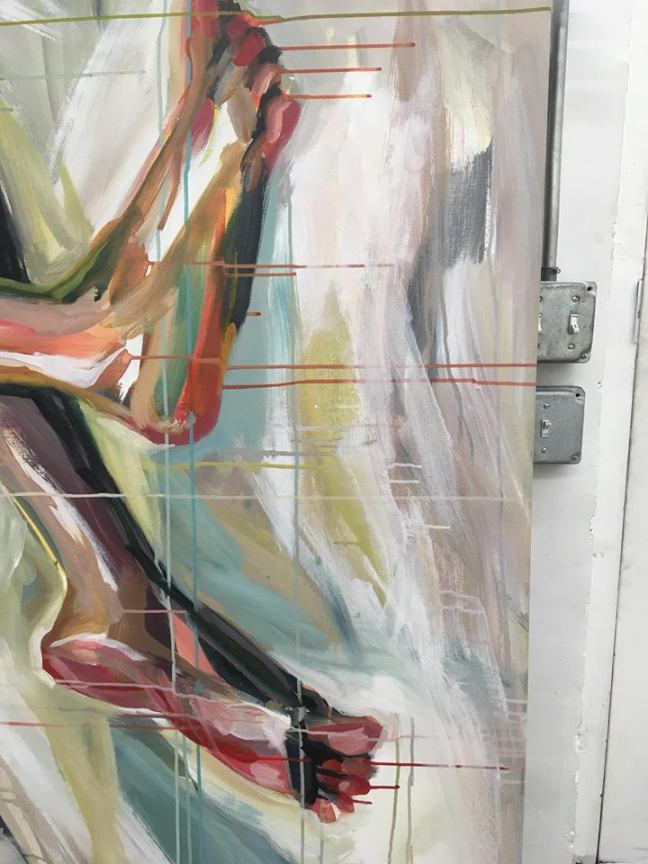 According to Stump, “Lena and I are similar in the way we approach art making. We are both extremely confident with our technical skills and understanding of the body represented in 2D, which frees us to make work that is actually less concerned about beauty and more about monstrousness.”

Gleason notes that the show is about the “female gaze and agency…of disrobing.” He says that nudity in art received a bad reputation when the models were all women and the painters men. But with two women creating this work, the tables have turned.

“Lena Moross uses nudity as a semiotic device within a psychological drama while Anna Stump pushes the boundaries and politics of professional eroticism…curating them has been a dream.”

Experience that dream for yourself Saturday, 8-11 p.m. at MuzeuMM, 4817 W. Adams in mid-city. The show runs through
– Genie Davis; photos provided by artists and curator 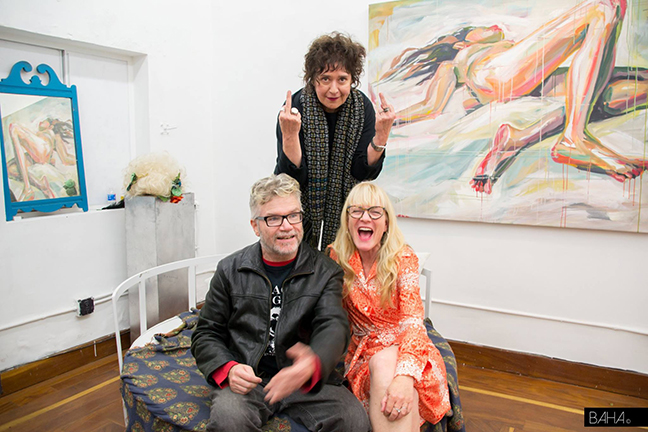 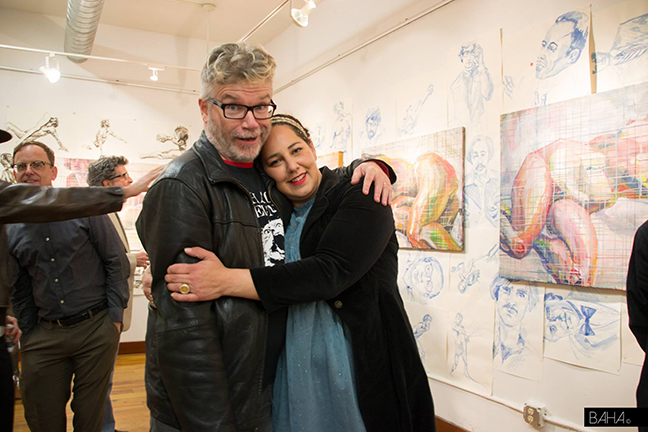 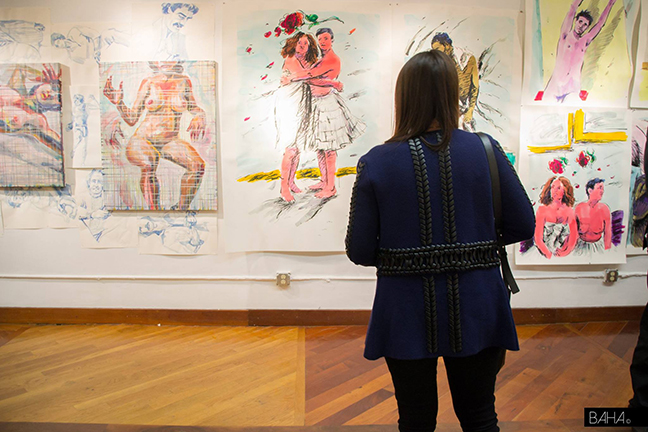 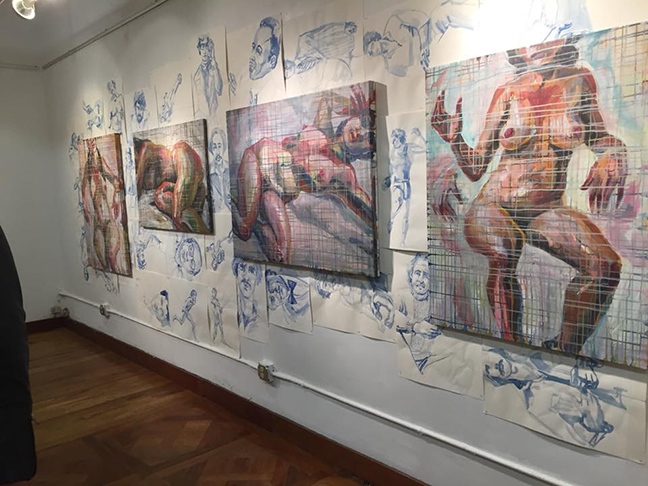 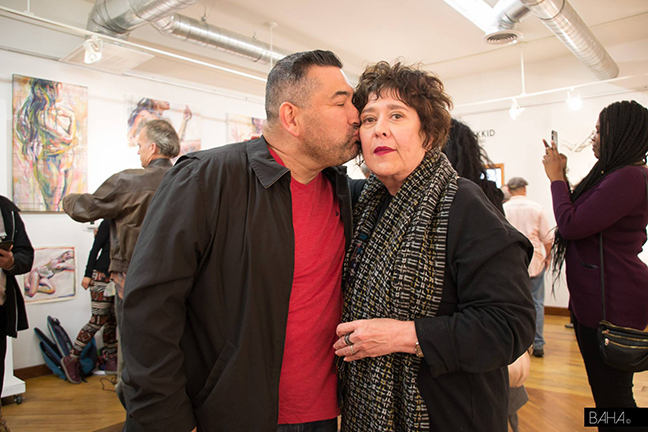 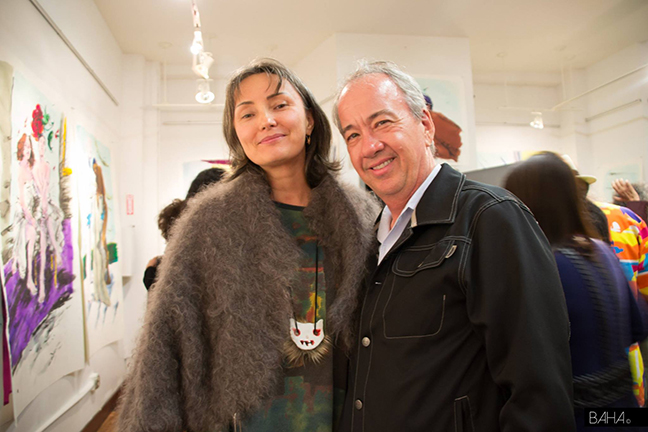 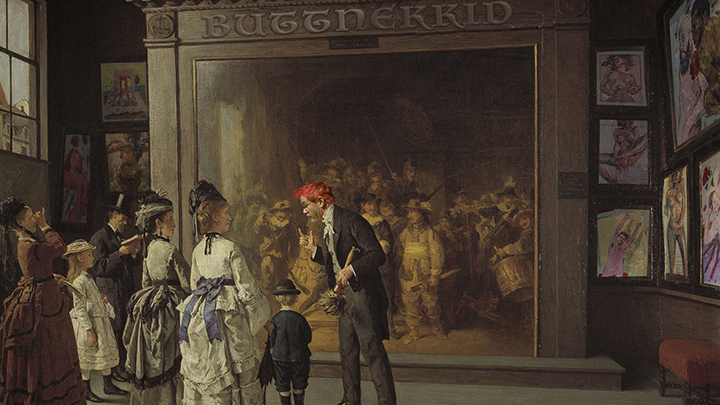 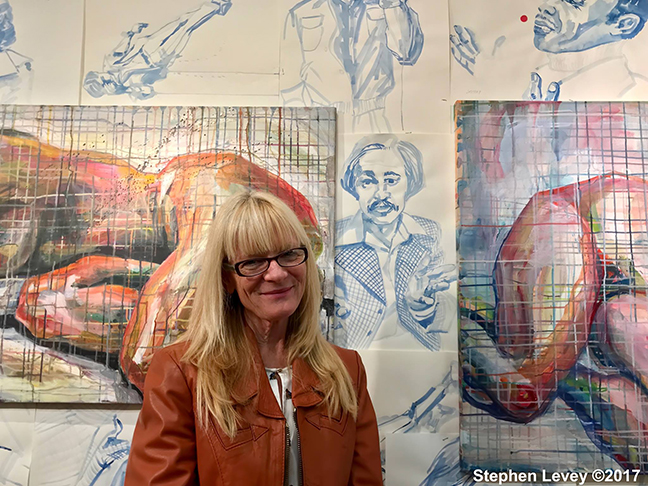 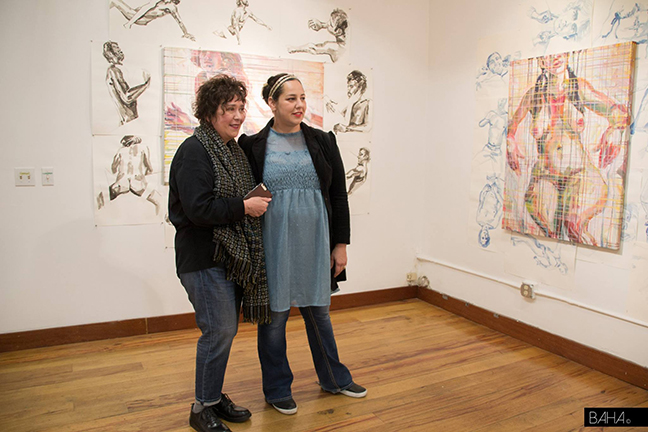